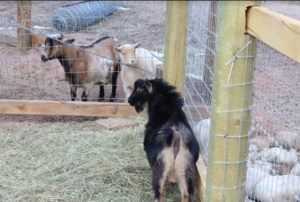 Nigerian Dwarf Buck for sale. 1 year old. Fabulous breeding. We have 2 and are selling the one we cannot breed to all our does (bloodlines too close). We have two sets of kids from him…excellent confirmation. He is sweet, fertile and gentle. He was the last buck that came out of Lil Bleats.

Here is a short video on the boring but essential basics in prepping for milking and post milking cleanup and, of course, treating the lactating doe.  For the recipes we use to clean up before and after, see below.

Before Cleanup, we use an Iodine mix we get at the feed store. I mix it about 10 to 1 and keep it in a jar at the barn.

After cleanup, we use a mixture of 20 drops tea tree oil, 20 drops lavender (both with antibacterial properties) and Dr Bonner’s soap (Dawn Dish Soap would work too).

We use rags, torn up from old towels, 1 rag per goat. We douse the rag with the iodine mix, swab the milking bowl lightly, wipe our hands, then freshen the iodine on the rag and wash her teats and udder area. That same rag will work at cleanup as well. After, be sure to wash her teats with the soap mixture or iodine, then soak her teats in that same mix. The leftover teat soaking can be used to scrub the milking stand when the milking is done for the morning/evening. 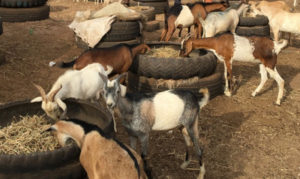 In West Africa, the pygmy goat was part of daily life ..providing meat and milk. It was called a West African Dwarf (WAD). In the 1930’s to the 1950’s and later, these goats were captured and sold as feed for large cats in US zoos. Some survived and became added attractions at some zoos.

The Nigerian Dwarf goat has also been enjoying a rise in popularity in the past 10 years or so due to their small size (no more than 75 pounds and 21″ in height), colorful markings (a Kaleidoscope of browns, whites and blacks), dairy characteristics (these little guys produce excellent tasting milk)  and their calm, friendly temperament. 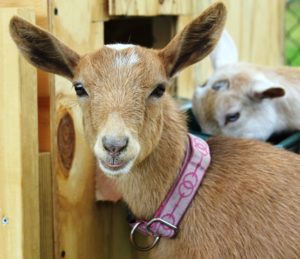 Many backyard or urban goat owners choose Nigerian Dwarves because of their small size. Their gentle nature and friendly personalities make them a natural as pets, 4H projects and micro dairies.

Healthy Nigerian Dwarf goats can live up to 15 years. However, Does in production may only live about 10 years due to complications in birthing. Bucks used to breed the Does, often live an average of 10 years, due to the stress of not being able to have free access to those pretty little does in heat.

If you are thinking about breeding, Nigerian Dwarf  Goats go into heat, on average, every 21 to 28 days. The heat cycle lasts 1-3 days. Unlike many animals, they can get pregnant all year round. With an average gestation time of 5 months, Therefore they can be bred all year round. A word of caution, however. If you don’t want to be a midwife in January, plan accordingly. Most owners separate the does and bucks until they want them to breed (hence the shortened life span of the buck). 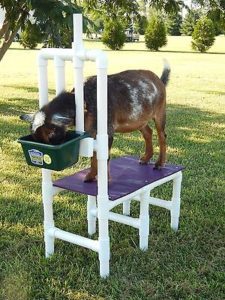 Nigerian Dwarf does produce one to two quarts of milk a day and can produce milk for up to 2 years if she does not get pregnant again. The milk is high in butterfat (6-10%) and makes excellent cheese (we make feta cheese), and Kefir (a drinkable yoghurt).

How smart are these lovelies? They are the smartest of the ruminants. 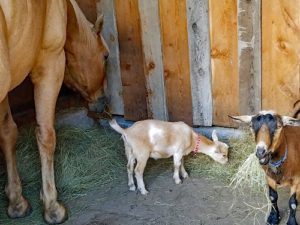 Our journey with Nigerian Dwarf Goats was inspired by our 17 year old Palomino, Rio. He lost his buddy, another gelding named Tucker and we set out to find him a companion. Many friends recommended a goat as a companion. And, of course, when you get one you must get two.

That prompted the research that led us to Nigerian Dwarf goats and then to the notion of milking, making feta cheese and kefir (a delicious, drinkable yogurt).

We got our start and first 3 does from Jennifer Crismon at CadDayPie Goat Ranch in Bennet CO.

After 6 weeks of preparation, we picked up the girls, Stella, Izzy and Jala. (see below).

Our learning curve has been steep but our mission is to breed and sell top notch Nigerian Dwarf goats so we are committed.   Most of the learning came from not assuming anything and spending hours each day with them. We watched our milker, Stella drop weight alarmingly, Izzy get diarrhea, Jala get caught 1/2 way through a fence, Izzy hanging upside down in the horse hay bin and more…. Life is rich and humbling

Enjoy this site. This blog is intended to be educational and at times, funny. I still have the heart of a teacher, having been one for 20 years. 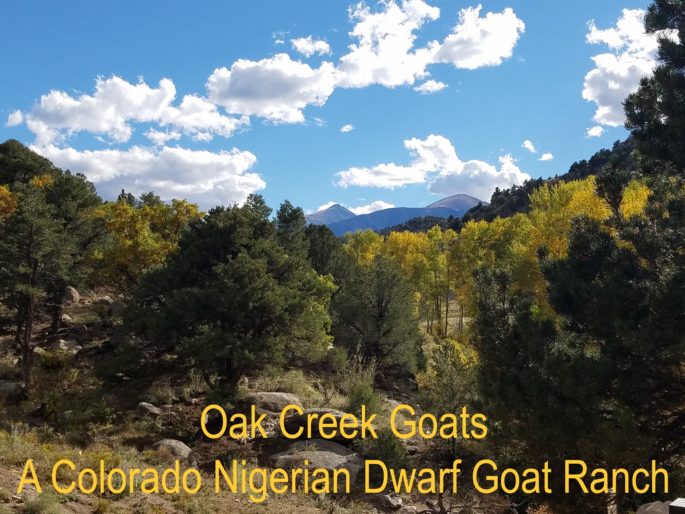 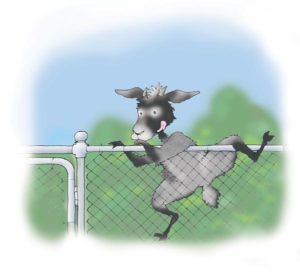 This blog is offered from my heart as a teacher. As we learn about our first experience with goats, we hope to pass on our “wish-we-wouldas and will-do-next-times”.

Our blog starts 7 weeks after we decided to find a companion for our Palomino Quarter Horse, Rio who lost his buddy about that time.  Quickly, the plan to buy an old wether (neutered male) to 2 young wethers because they need company to maybe goat milk is good to …..why not have babies (not us, the goats). With both of us working full time in our real estate business,  those first 7 weeks were a might full. Everything we learned was either from experts or online. A blog with resources will follow. And everything we undertook was more than twice as time consuming as we thought.

We learned about shelter, goat escape proofing, predator proofing, accident prevention, feeding and watering systems, sleeping quarters, how to milk, how to build milking stands, and how to smorgasbord other plants from our 37 acre ranch for them to see what rings their dinner bell.  We even learned how to secure a gate properly. After living with horses for years, the technique is quite different….swing the gate into the goat area, dash in with a not so graceful slow swing of your foot as a barrier, then swing the gate closed and secure tightly before they jump against it in pure glee.

Are we ready to rest? No. Our next sprint will be learning about breeding, buck quarters, and pregnancy. Stud service is not an option for us since we live hours from other good breeders. So…. we purchased on top of the line buckling and a wether to keep him company. No rush. We pick both up the the Colorado Dairy Goat Association Harvest Show in Longmont CO in 1 week.

Learn and create and hopefully replicate is our mantra. We start creating quarters and infrastructure for our 6 week old buckling Shelby and his wether companion, Jasper today.

Come join us on our journey.. follow our blog,  on Colorado Life with Nigerian Dwarf Goats.